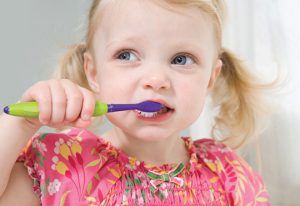 It may be amazing to learn that the most ordinary childhood disease is tooth decay. It is a widely held belief that toddler tooth care isn’t significant, because primary (baby) teeth will be lost once the permanent teeth begin to erupt. Most parents aren’t aware of the seriousness of this until a dentist recommends extensive work that costs time and money.

The rates of cavities in young children have been on the rise, according to The Centers for Disease Control and Prevention. They report that one in seven 3- to 5-year-olds have untreated tooth decay. Diet plays a large role in this rising problem, as people of all ages are consuming more sweets and carbohydrates than ever before. The bacteria created by sugars feed on the calcium protecting the outer area of the tooth. Once that layer has eroded, the opening in the surface of the tooth becomes a cavity. Another cause for the increase in cavities may be the reputation of bottled water, as well as the discontinuation of fluoridation by public water municipalities. Public drinking water has been fortified with fluoride for many years. Fluoride is reported to strengthen tooth enamel, making it more resistant to the acidic byproduct created by bacteria. Without this reinforcement, the bacteria have more opportunity to compromise the calcium layer of tooth enamel.

Young children and toddlers are not prepared to care for their teeth well until at least the age of six, since they lack the dexterity necessary to brush all of the back teeth surfaces. Parents tend to be surprised to learn that their children aren’t getting the job done properly. They should start teaching their toddlers how to brush their teeth by doing it together. Make it into a fun game, where they watch you and mimic your motions. Once done, finish brushing their teeth to make sure it is done properly.

There are steps parents can take to recover their toddler’s tooth care above brushing alone. Consider the root reason of tooth decay, and make an effort to minimize or remove them. For example, limit the amount of sugary and carbohydrate-laden food and drinks consumed, and decrease the frequency of meals. Parents are often shocked to learn that most juices are as sugary as soda and candy, and when their toddler has access to juice in a sippy cup all day, they are persistently coating their teeth in sugar. Brush their teeth at least twice a day, to eliminate the bacteria constantly building up on the enamel.

A great percentage of young children have anxiety related with dental office visits. Once you understand the source of their anxiety, you can propose them coping strategies that may alleviate their apprehension. Frequent dental visits are not only helpful for obvious reasons, they will also help to make the process less intimidating and calm some of their fears.

How Long Will It Take to Recover From a Full Mouth Reconstruction?

Five Different Types of Cosmetic Dentistry for Your Smile